Building blocks of joint attention: Sensitivity to having one’s own gaze followed in early infancy 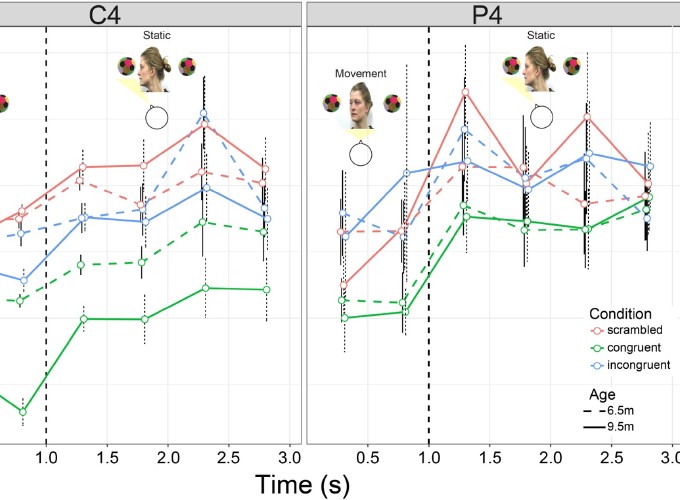 Building blocks of joint attention: Sensitivity to having one’s own gaze followed in early infancy

Detecting when one’s own gaze has been followed is a critical component of joint attention, but little is known about its development. To address this issue, we used electroencephalography (EEG) to record infant neural responses at 6.5 and 9.5 months during observation of an adult either turning to look at the same object as the infant (congruent actor), or turning to look at a different object (incongruent actor). We also used a preferential looking paradigm to investigate whether infants would demonstrate a preference for the congruent versus incongruent actor. Greater suppression of alpha band activity in the congruent compared to incongruent condition was revealed at both ages in central and parietal regions. However, the effect of congruency on alpha suppression was stronger at 9.5 months, and only at this age did infants demonstrate a preference towards looking at the congruent actor. Together, these results suggest that although infants are sensitive to others’ gaze following from early on, important neural and behavioural developments occur between 6.5 and 9.5 months.