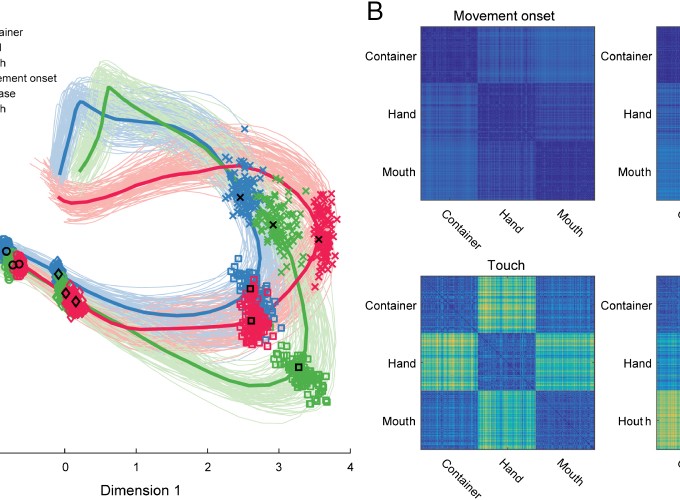 Although it is established that F5 neurons can distinguish between nonsocial goals such as bringing food to the mouth for eating or placing it in a container, it is not clear whether they discriminate between social and nonsocial goals. Here, we recorded single-unit activity in the ventral premotor cortex of two female macaques and used a simple reach-to-grasp motor task in which a monkey grasped an object with a precision grip in three conditions, which only differed in terms of their final goal, that is, a subsequent motor act that was either social (placing in the experimenter’s hand [“Hand” condition]) or nonsocial (placing in a container [“Container” condition] or bringing to the mouth for eating [“Mouth” condition]). We found that, during the execution of the grasping motor act, the response of a sizable proportion of F5 motor neurons was modulated by the final goal of the action, with some having a preference for the social goal condition. Our results reveal that the representation of goal-directed actions in ventral premotor cortex is influenced by contextual information not only extracted from physical cues but also from cues endowed with biological or social value. Our study suggests that the activity of grasping neurons in the premotor cortex is modulated by social context.