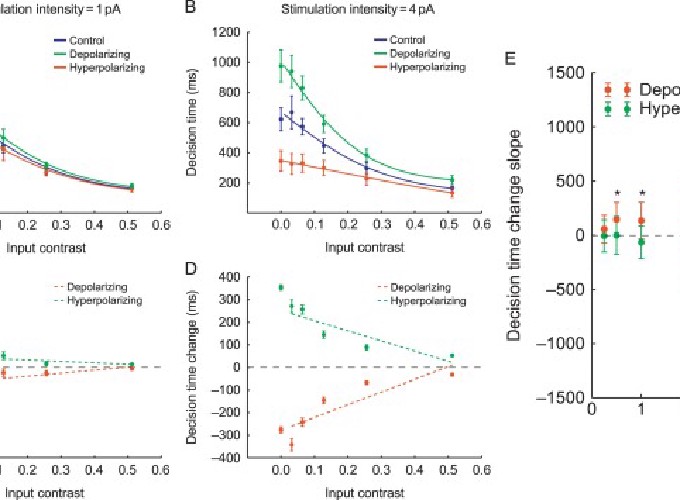 Despite the success of noninvasive brain stimulation (NIBS), the mechanism of action through which different stimulation techniques interact with information processing in targeted neural circuits largely remains unknown. Applying neurostimulation in silico to computational models with biophysical plausibility provides one route to interrogate the possible mechanisms through which stimulation interacts with neural circuits, and generate predictions about the resultant behavior. Here, we address the recent observation that the physiological and behavioral effects of transcranial direct current stimulation (tDCS) might be nonlinear with regard to stimulation intensity or duration. We simulate neurostimulation in an established, biophysically informed neural network attractor model that generates simple behavioral choices and thus allows for assessing the impact of stimulation on both neural dynamics and behavior. We demonstrate that nonlinear effects of stimulation intensity on the accuracy and decision time of the model can arise from a limit on the integration rate of the network, nonlinear effects of stimulation on neural firing rates before the onset of the stimulus, and the inhibitory effect of hyperpolarizing stimulation on pyramidal neurons. We thus present a detailed modeling treatment of nonlinear tDCS effects during a behavioral task, and provide detailed hypotheses about the neural causes that lead to observed nonlinear behavioral effects during stimulation. This framework can provide a blueprint for future work on the neural and behavioral consequences of NIBS in health and disease.